Simply put, gluten is a protein found in wheat which gives it its characteristic elasticity– the ability to mold it into a highly pliable and versatile dough. It is also found in other grains such as rye, wheat, and barley. Apart from these obvious sources, it can be found in beer, commercial salad dressings, soya sauce, processed meat, and seasonings such as asafoetida (hing) which uses maida as a binder.

Why is gluten bad?

Many individuals are intolerant to gluten in varying degrees. 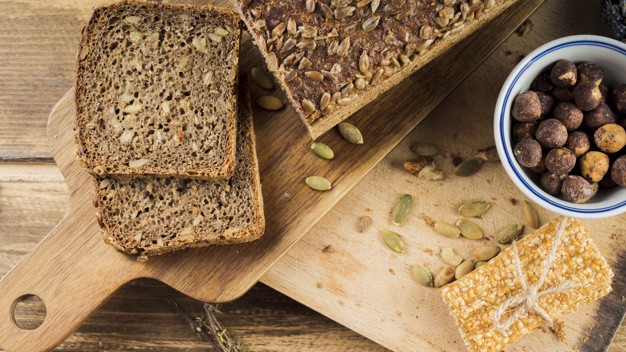 If you experience bloating, gas, constipation, brain fog or fatigue after polishing off a pizza, a sandwich, or a bowl of pasta, you could have gluten sensitivity. This is the milder side of gluten intolerance. However, recent studies have suggested that these symptoms are not caused by gluten, but instead by fermentable, poorly absorbed short-chain carbohydrates. This is still a topic of hot debate.

If you suffer from chronic diarrhea, vomiting, cramps, weight loss and fatigue in conjunction with anaemia as a result of having these foods in your diet, you could have Celiac Disease. This is the most severe form of gluten intolerance. Celiac disease is an autoimmune disease and a chronic digestive disorder. It results from an immune reaction in the body against “gliadin,” a kind of gluten. In celiac disease, the gut lining is inflamed and gradually destroyed, leading to constant malabsorption of nutrients and minerals, leading to further deterioration. A person with celiac disease should mandatorily cut out every variety of gluten-containing food from their diet.

Sometimes individuals who do not have actual celiac disease may have symptoms suggestive of it. This is non-celiac gluten sensitivity (NCGS), which has also been linked to some mental health issues such as anxiety and depression.

How is gluten intolerance diagnosed?

Though people experiencing non-celiac gluten sensitivity symptoms have benefited from cutting out such foods from their diet on their own, there is a sounder way to get a diagnosis. The body of a person with real gluten intolerance produces antibodies against gluten when it is consumed. These can be detected via a blood test designed to pick up on anti-gliadin antibodies, endomysial antibodies, and anti-tissue transglutaminase antibodies.

In addition, an intestinal biopsy may be performed to confirm the presence of celiac disease. This involves endoscopically removing a small sample of the patient’s intestinal lining for analysis.

In most cases, staying off foods containing gluten, for life, takes care of the condition by allowing the intestines to heal themselves. Such individuals can lead healthy lives provided they continue to stay on a gluten-free diet for life. Eating a gluten-containing item can trigger a relapse.

In rare instances, when celiac disease has been left untreated for a long time, the intestine may have lost its ability to renew itself when gluten is withdrawn from the diet. This stage is known as “refractory disease” and needs advanced treatment with corticosteroids and immunosuppressive drugs.