Ashwagandha is an ancient medicinal herb that started in India over 3000 years ago. In Ayurveda, ashwagandha is considered as Rasayana, means an herb that keeps you young. Today, ashwagandha leaves, seeds, and roots are used to treat various medical conditions. It has infinite benefits for your body and brain such as it boosts your brain function, fight against anxiety and depression, control blood sugar level, and more. However, the herb should be avoided by pregnant women as it can lead to early delivery. Read in detail ashwagandha benefits, used, and side effects. 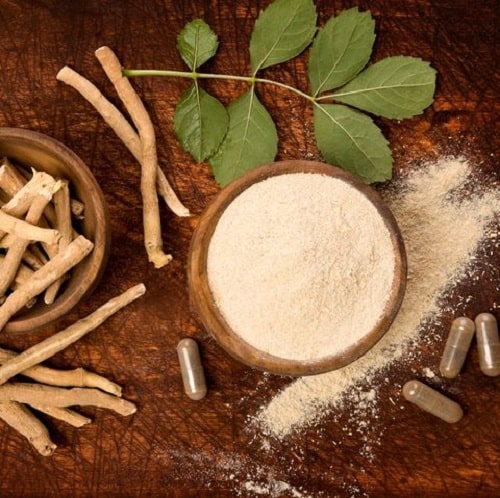 India is popularly known as the home to Ayurveda and other medicinal herbs. One of the richest herbs from the reservoirs is Ashwagandha, also known as Ajagandha or Amarguna.

Ashwagandha is an Indian grown shrub that has been used for making medicines for hundreds of years. The elements found in its roots and fruits are known for pacifying the brain, boosting the immune system and lowering blood pressure. Thereby, it is categorised as an Adaptogen implying that it manages the stress level in the human body.

For its medicinal properties and elements, uses of Ashwagandha includes-

It is a distinguished herb from India’s Ayurvedic reservoir and is credited as a popular supplement because of its vital constituents. Here are some of the benefits of Ashwagandha-

After several types of research, it is deduced that Ashwagandha has the ability to help reduce stress. When tested on rats, it was noted that the elements present in the herb caused the blocking of stress trails in the brain by sending chemical signals in the nervous system. Hence, it came to be categorised under Adaptogens. But, there is no solid evidence of the other claimed uses.

Consumption of the root extract called KSM66 twice in a day after meals and Shoden on a regular basis can help improve the symptoms of stress.

Analysis: According to a continuous 2-month study of individuals with chronic stress issues, it was recorded that consumption of supplement with Ashwagandha helped reduce anxiety & stress up to 69%.

As per several human studies conducted by researchers, Ashwagandha stimulated the secretion of insulin in the body of both a healthy person and a diabetic person. As a result of which the blood sugar level in the body was reduced.

Analysis: A similar study on people with type-2 diabetes recorded lowering of fasting blood sugar level. However, the results were questionable which implies that there is only a little evidence that this herb entirely reduces blood sugar.

Animal and Test-tube studies have recorded that there is a component of Ashwagandha called Withaferin which helped in inducing Apoptosis- a form of ‘programmed cancer cell death’.

Moreover, studies on animals showed that the same element helped in reducing lung tumor. There have been a lot of speculations that Ashwagandha can slow down human cancers such as breast, lung, kidney, and prostate cancer. However, there is no proper evidence of the speculations.

Analysis: The bioactive compound in the herb, Withaferin, caused a reduction of cancer cells in Animal bodies but whether it has a similar impact on the human body or not, is still unclear.

Regular but controlled consumption of supplements containing Ashwagandha has shown positive results in curing Arthritis. Its elements act on a nervous system and prevent the sending of pain-related signals in the body. Moreover, because of its anti-inflammatory properties, it is used to treat arthritis.

Analysis: Studies have shown that people who consumed Ashwagandha, gained muscle strength and size. Nonetheless, in some cases, it also resulted in body fat percentage.

Uses of Ashwagandha include consumption as a medicine to reduce cholesterol levels in individuals with high cholesterol. The herb decreased the level of blood fat in the Animal bodies. And, a study in rats recorded that taking cholesterol reduced cholesterol by 53%.

Analysis: According to a study conducted for 2 months in chronically stressed adults, 17% decrease in LDL (Bad cholesterol) has been recorded after taking high doses of ashwagandha extract.

Individuals suffering from Alzheimer’s often undergo loss of memory and brain functions because of damages that connect parts of the brain. Studies conducted on rats during the early stages of the disease showed that the herb may provide protection from excessive health damage.

Analysis: As per the African Journal of Traditional, Complementary, and Alternative Medicine, a few examinations have inspected that the use of Ashwagandha relaxes or obstructs the loss of brain functioning in individuals suffering from Huntington’s, Alzheimer’s, and Parkinson’s.

The report of a few studies conducted on Animals suggests that Ashwagandha may mitigate problems in brain functioning caused by injuries or damage. It offers protection to nerve cells and advances antioxidant activity.

Analysis: In the study performed on healthy individuals showed that consumption of 500mg of Ashwagandha extracts improved the reaction time, performance of different tasks as compared to the individuals who received a placebo.

Side Effects of Ashwagandha

It is suggested that one should take the limited and controlled dosage of Ashwagandha in order to avoid some side-effects which are not favourable for a healthy body.

Some of the side-effects of Ashwagandha include-

Ashwagandha and Ayurvedic medication despite everything, remains to some degree, a puzzle to current science. Several studies have been conducted but turned out too small, performed distinctly on creatures, or had a few imperfections in the overall plan. Therefore, specialists can’t state with conviction that it’s a successful treatment. However, the advantages cannot be disregarded either.